You know when you have a project you’ve wanted to do forever but you think you lack the ability or materials to pull it off?  I love it when I get to do one of those, especially when it actually works.  I present to you my miniature, sapphire-encrusted, solid silver ocarina! 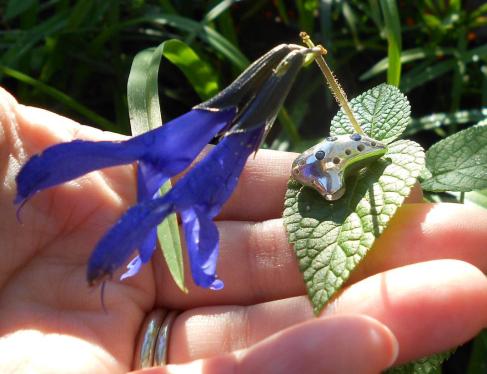 Though so far everyone who hasn’t played Zelda or is a music aficionado has asked what on earth it is, I have been captivated by ocarinas for several years.  I own a nice 12-hole soprano G Focalink that I ordered from the maker in Samoa, but just like the mandolin in my Wishcraft Studio logo, I haven’t learned to play it (my excuse is that they are a bit loud for apartments).  My husband and I keep promising that someday we will have jam sessions…he on is Irish pennywhistle and bodrhan, and me on my mandolin and ocarina. 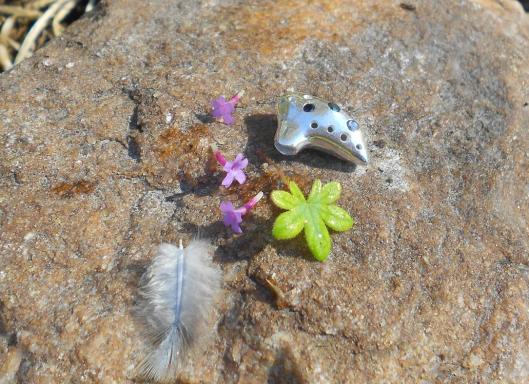 As ocarinas tend to be made of clay (and as I obviously like punishment), I fashioned this ocarina in a way they are made in real life, but in 1:12 scale.  Starting with a sweet potato-shaped lump of Sculpey and a piece of cardstock to keep the mouthpiece open, I cut out mirror images of the general ocarina shape from extra silver clay.  After a lot of shaping, I had the basic form molded around the Sculpey, and the sapphires inserted.  (I also somehow ended up with a lot of my bunny’s hair in the clay, which I one reason I am keeping this ocarina as a memento.)  When the clay was dry, I moistened a blade and cut a seam around the form so I could remove the Sculpey (top and bottom right photos).

I moistened the edges and smoothed them back together.  Then came drilling lots of holes (eight for fingers, two for thumbs, one for a chain) with files and carving out the fipple (top and bottom left photos).  Fingers were crossed during the kiln firing, and I was relieved when it came out as good as it did.

If someone found this little instrument while out in nature, I would hope the thought would pass their minds that a fairy misplaced it.  While I can’t muster more than an airy whistle from it, perhaps a diminutive pixie would have more luck? 🙂