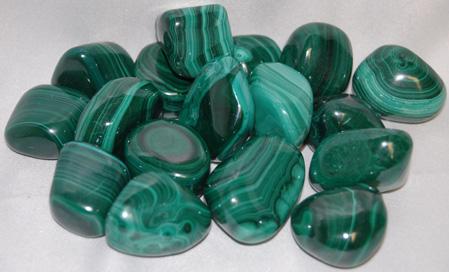 This week I am going with another eerie green stone, with a unique color and layered appearance that makes it immediately recognizable.  Humans have used it for decoration for over 10,000 years, and its abundance makes it a staple of rock collections.  In medieval Europe, it was a protective talisman for children and travelers, able to ward off nightmares.  The ancient Egyptians associated it with Hathor, the goddess of love, joy, beauty, femininity, and dance.

Malachite is about 60% copper in the form of copper carbonate (CuCO3.Cu(OH)2) and it was prized by the ancient Egyptians for its beauty as well as its ability to be easily reduced to copper metal.  A classic chemistry experiment is to heat powdered malachite, turning it into copper oxide, and then add carbon (usually wood charcoal) to combine with the oxygen, leaving pure copper.  Powdered malachite was also worn as eye shadow (the Egyptians probably not knowing the dust was poisonous).  They believed adorning the eyes protected them from evil and connected them with the gods, like a protective amulet applied directly to the skin.  A band of malachite worn around the head or arm warded off cholera, as the Egyptians noticed that Hathor’s copper miners rarely suffered the disease.

Malachite can grow in a variety of amazing shapes, the rarest being needlelike crystals.  The classic bands of color come from the chemical composition of the environment shifting over time.  Malachite also plays well with its copper-bearing friends chrysocolla, azurite, and turquoise, creating beautiful mixtures. It is a favorite of carvers because it is very soft (4 Mohs), but polishes well.  The Russians used their vast deposits of malchite to create enormous columns for Issac’s Cathedral and the Winter Palace in St. Petersburg.  Most malachite today comes from the Democratic Republic of Congo, the Republic of Namibia, Russia, Chile, the American southwest, and Australia.  As malachite is so easy to come by, it is very inexpensive, but that doesn’t mean it isn’t beautiful. 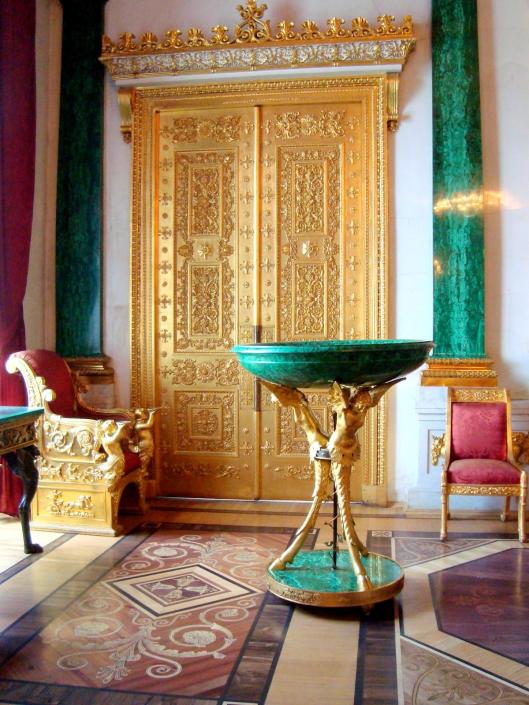 Corner of the Malachite Room in the Winter Palace.  Photo by Sherri Brown. http://around61.blogspot.com/2012_06_01_archive.html

2 thoughts on “Gemstone of the Week: Malachite”