I finally got around to posting this one, but I am glad I waited because today’s rainy weather at the coast made for some satisfying photography.  I present the Silver Nautilus pendant.

I found a great piece of silvery driftwood with lots of character and nooks and crannies for staging shots.  I am an amateur photographer, and every once in a while I get lucky (and sand in my shorts).

This is a companion piece to the Sapphire Swallowtail pendant, which I also took along for pictures.  I wanted another nature-themed sculptural piece, something oceanic, and tried to incorporate the idea of a wave and a spiral seashell. 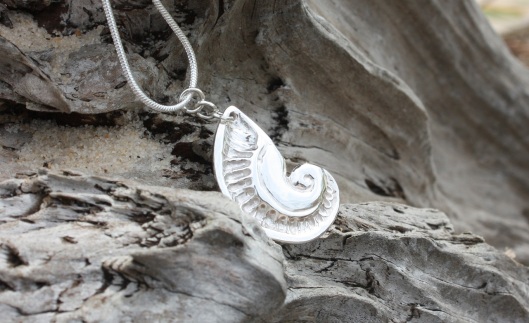 The nautilus is an amazing creature, with a shell made of chambers of increasing size.  As the animal grows it closes off its previous chamber, resulting in a beautiful, logarithmic spiral.  Mine isn’t that accurate, but I did make it septated.

The piece is finished in a series of watery blue sapphire cabochons in settings made to resemble barnacles. This is a one of a kind necklace and is sold!

I had assembled a plastic Lindburg model Miquelet flintlock last Halloween for the costume but never got around to finishing it.  The prop had been hiding in the back of my closet, two feet long, stark white, and absurdly oversized for a 5’2” pirate such as myself  (I mean, Captain Delarosa of the Airship Delirium).  After a trip to the Scrap Exchange (or as a friend calls it, “The Den of Malignant Hoarding”), the bargain bins at Michael’s, and my dad’s garage, I was ready to make something shiny.

I dubbed the piece “The Magpie” because of its ability to purloin unprotected shiny objects.  In my mind, her owner would be less likely to shoot someone and more likely to surreptitiously steal their stuff from around a corner.  Claw machines are my favorite arcade games and I was a big fan of Johnny Five from Short Circuit as a kid, which combined to form the grappling hand of awesomeness.

The claw is mostly made of matte board, with gator board on the inside, scrapbooking paper details, and $0.99 metallic stick-on dots.  The brass circles were a happy find at the Scrap Exchange.  And now on to my second-favorite part!

My husband and I had a lot of fun coming up with the sayings on the gauge, because as a fanciful gun, real numbers aren’t required.  I had stumbled across a round plastic container in my dad’s garage, and half of it became the base for the gauge.  The “glass” front is a piece of clear plastic that I cut and sanded to fit, with the paper dial glued behind.  The hand of the dial is made of sheet brass that I cut and painted black.  The idea is you set the distance with the buttons on the top, aim, and fire the retractable claw for a nice three-fingered discount.

I really lucked out at the Scrap Exchange, because I also found the clear plastic tube that holds the claw’s cord (a laboratory or medical-grade filter), and the cover for the cord reel is the base of an old metal light fixture.

All of the painting was done in metallic acrylics (gold, copper, and silver) over a layer of black gesso and sealed with PYM II spray.  The Magpie held up pretty well at the convention, and she’ll go really well with the brass and pleather light-up gauntlet I plan to make out of the fabrics you see in the backgrounds. 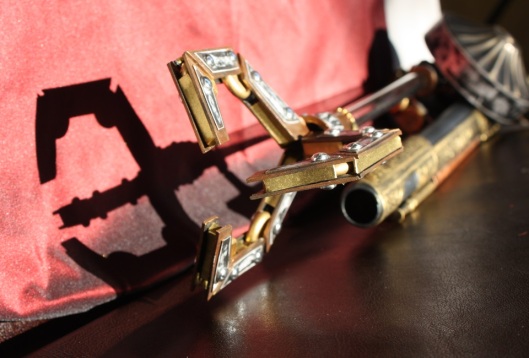 Arrr, mateys!  I be comin’ for yer valuables!

Today’s stone has caught my attention off and on for a while now, and it is for the person who wants something a little different.  When I first saw phosphosiderite, I thought it wasn’t real because of its strange orchid color.  The long name describes its composition (Fe3+PO4·2H2O), due to phosphorous and iron (sidero- is Greek for iron).

The classic specimen is pale lavender with yellow veins, but it can also be in reds, pinks, and clear.  At 3.5 to 4 Mohs, it should be treated with care, but can be worn as cabochons in jewelry just like its cousin turquoise.  Since its discovery in 1890, phosphosiderite has been found in Germany, the US, Portugal, Peru, Chile and Argentina.

Known as “The stone of healing and hope,” phosphosiderite is supposed to give happiness and a sense of peace to its wearer.  I think of phosphosiderite as one of those interesting “Gee Whiz” minerals, and have been trying to come up with a neat design to feature the pale purple pebbles.