Well, it has been a few weeks months of work, but the sun has risen!

I wanted realistic thatch on the little mill cottage, which meant paying the piper. If you have read my brick or tile posts, you’ll recognize a theme of masochism here. 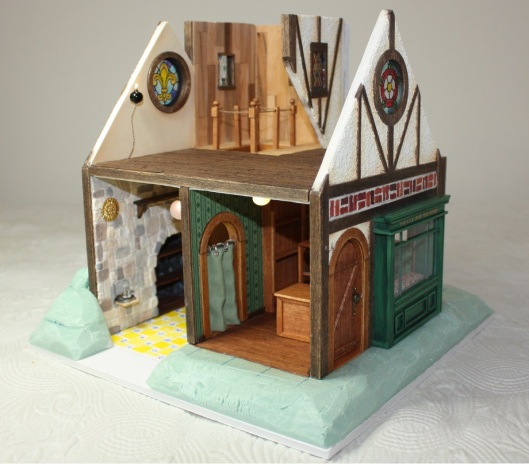 Here’s the “before” picture from my entry into the Undersized Urbanite contest, and my poor cottage sat bald for almost a year.

The first part was making something to tie the thatch to, which meant I got to get to know one of these babies very well:

After some searching I realized most of the inexpensive hand drills are designed to go from tiny to 1mm wide holes, or from 1mm and up, and I only wanted to buy one tool to cover the range. If you need to drill tiny holes in wood or similar materials relatively cheaply (I got mine for $16), this is the one you want. People on Amazon love it for good reason, and it comes with a lot of spare drill bits!

Yay for blue tape! Still the hero of this build.

The wood frame completed and glued in place, it was time to get to business. Real thatch is made of dried reeds, wheat, or other grasses. My 1:24 thatch was coconut fiber, which played the part pretty well. Fair warning to any who would use this stuff, my carpet, dollhouse, and even my clothes and hair were dusted with coconut while I worked. Maybe 50% of it ended up on the house. The coconut also seems to be getting scarce on minis websites, and a slightly fluffy alternative I learned about after the fact (and may have liked better) is called plumbers hemp, which was used on these houses to great effect. 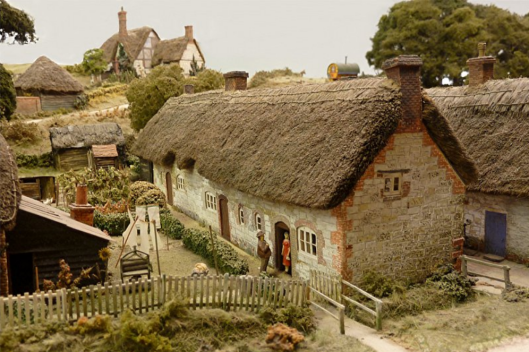 This is just one image from the coolest-looking museum ever! Truly amazing work.

As for securing it to the roof, I searched high and low and found a thin wire coated with woven strings that looked like a tiny rope. More modern thatching relies on wire to hold the bundles in place, but rope was the go-to material in ages past. The scary part is I used most of my 10 yard spool on this house that fits inside a basketball case. 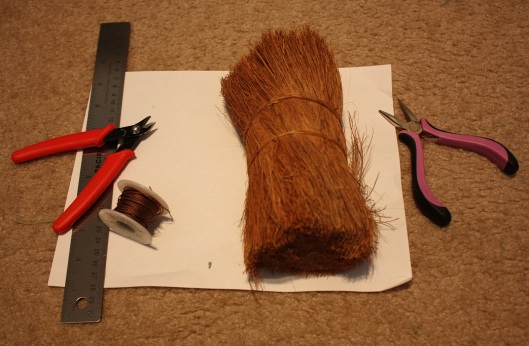 Tools of the mini thatching trade.

YouTube and Google were my saviors in my hunt through historical building techniques. While tying lots of tiny bundles with individual knots would have been accurate, it would have used lots of my precious wire and remaining sanity. I figured the tension on the fibers (and thus their final shape) would probably be smoother if I used a different technique I found pictured on a German thatching website. Little German website, though our paths may never cross again, I owe you a debt of gratitude.

A couple of rows in, I reaffirmed that this process was going to take lots of patience. I used long runs of what was more or less a whip stitch (or a simple continuous pattern if you’re into surgery). I would pass the wire over a bunch of fibers and then run the wire around the dowel underneath and pull to lock in the bundle. Repeat ad infinitum. While the wire did a good job of holding everything in situ, I used watered-down wood glue to make sure this was a 50-year roof, which meant pausing to let each row have time to dry.

I knew going in the “old lady” could have two possible hairstyles: a clean-cut bob or a messy nest. I went with the former because the untamed roof was eating the poor little cottage. It has gobbled up one of the windows *sad face*, and I’m covering for my poor architectural choice of aperture placement by saying the windmill tower was the original structure, with the rest of the building added later. That’s also why the mill’s floors, walls, and windows are different. 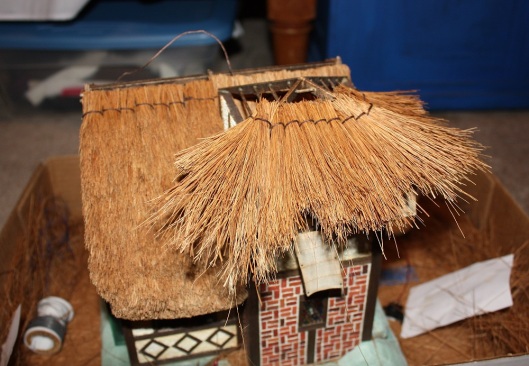 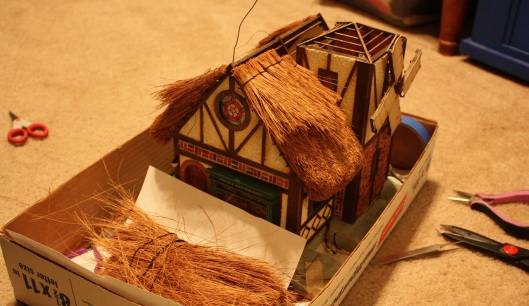 At first I imagined I was trimming a bonsai, tentatively and lovingly shaping the roof with a small pair of scissors. I soon realized that to get actual results, I had to be more aggressive, as if weed-whacking an overgrown hedge, Edward Scissorhands-style. Pro tip: coconut turns into adamantium when more than ten strands of it are in close proximity.

Having climbed the mountain on this pilgrimage, I arrived at the peak. In real life, the ridge cap was a thatcher’s signature, and each would have their personal pattern. I figured I’d come this far and my house was already ridiculously quaint/prim/floofy, so why not? I picked a common scalloped design, and borrowed some knowledge from the mighty Rik Pierce (the awesomeness starts on page 27) to use tiny basket weaving reeds from the Basket Maker’s Catalog. The rest of how I did it is a secret ;-). 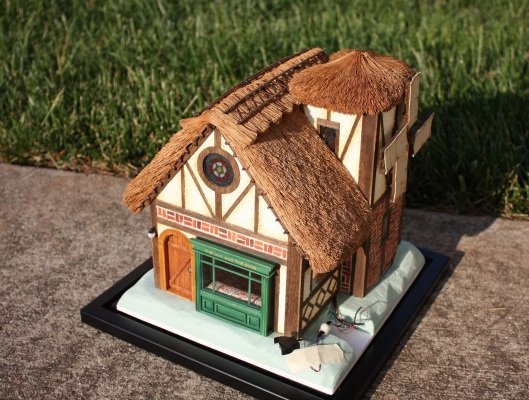 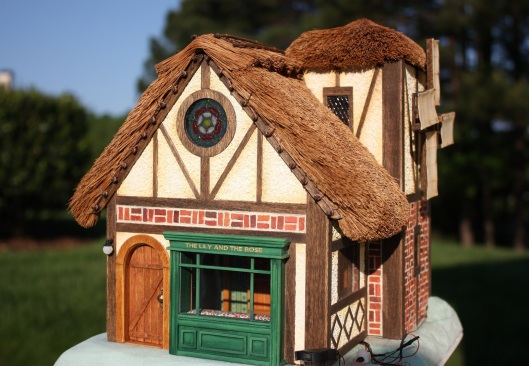 I certainly wouldn’t want to do this process again any time soon, and knowing what I know now about thatched roofs, this one has some humorous design flaws, but I’m happy with it. My next steps are to do the landscaping, which I’m looking forward to, and then it’s all about making what goes inside.