It came down to the wire and our apartment is buried under the most epic crafty mess, but here is my submission for the 2015 Undersized Urbanite, the Hawaiian bungalow. (For the full experience, here’s some mood music.)

It’s called the Ohana House because ohana means family, and several of the items in the house represent my family and friends. (Yes, I did watch Lilo and Stitch last night).

Hawaii is an amalgamation of cultures, such as the Polynesian, Japanese, Chinese, and Puerto Rican ways of life, and I wanted to incorporate them in the house as well. I may post more detailed info on some of the objects after the contest is over, but today is about the whole (i.e., it’s really long because I got behind on posts).

The surfboard represents my coworker, because she is always cheerful and fun and doesn’t let life’s troubles get her down. She is also a wonderful mom and I see her supporting and protecting her family, as a surfboard supports its rider. This old-school board is made of strips of basswood, mahogany, and walnut to make the pinstripe, with a coat of poly for some shine.

My first attempt at a tiki carving was a laughable failure, but number two was a passable Lono, the hippie Hawaiian god of music, agriculture, and peace (seriously, he rode into the world on a rainbow). I confess his bum cheeks are not symmetrical, and his hands-on-hips stance made the Macarena play in my head for longer than is healthy.

One friend of mine is an avid reader, and her homage is a bookshelf made of Hawaiian koa from Hilo. It came as rough pen blanks that a super cool neighbor cut for me into thin slices. I’ve never worked with such a hard wood, but even covered in sanding dust the koa was iridescent. Most of the books are mini versions of her favorites, plus some National Geographics because my grandmother always shares them.

The lasercut doormat was a more epic undertaking than I’d anticipated, but the results were almost worth it. More than one swear word was uttered as I played a tiny game of Operation, blueifying just the nooks and crannies with paint.

My father-in-law likes wearing Hawaiian shirts, and the last time we went to Hawaii, he asked us to bring back the loudest one we could find. We did not disappoint, but I toned the mini version down a bit. Painting this shirt with Setacolors was nerve-wracking but a lot of fun. The buttons are real mother of pearl so they sparkle a bit, and the kukui nut lei is made of seed beads and tiny paper flowers.

I brazenly admit I spent way too much time on the ukulele, but my strange passion for the instrument got the better of me again. I relied on laser cutting for the birch body, and then did some carving and sanding to shape the neck. It has a real Gaboon ebony fretboard and saddle, and an abalone diamond in the headstock to give it some extra sparkle. A coat of satin poly made me want to hug it, but the stories were true, it takes polyurethane forever to dry on ebony and the instrument stayed sticky for a whole week.

I have always loved the stylistic portrayal of butterflies and moths in Chinese art, and tried to make a lunar moth on the cabinet. This piece existed before the house did and I used the cinnabar red, jade green, lacquer black, and gold as the color scheme for the rest of the room.

Since I’ve already done a post on making bonsai, the only thing I’ll say about this one is that I made the pot similar to how they are made in real life and it got a fun-size glass Buddha. My resident also has a nice Japanese tetsubin and tansu (though no cups to drink tea from yet). 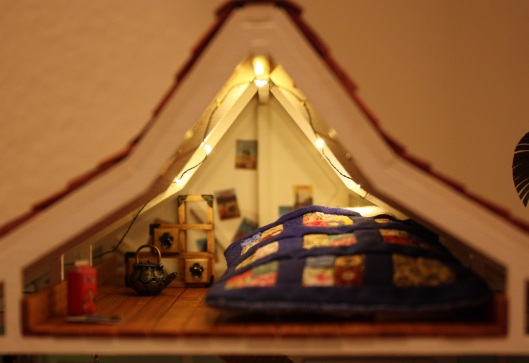 I imagine the person living in this house to be fond of travel and that they have a collection of vintage travel posters, postcards, and pen pal letters on display in their inner sanctum. I’d been pondering some industrial-style hanging lamps, but after deep discussion, my husband proclaimed this resident was too spontaneous to have dedicated lighting, so they rigged up a string of Christmas lights. The hubs also thought the person would have a sleeping bag tucked in there, but my friend and I broke the tie for a Japanese futon with a quilt and pillow.

Here is the underside pre-flooring, because it’s hard to photograph the posters in the finished house. I didn’t have a warm tropical wood to line the eaves and loft floor so I used cherry. 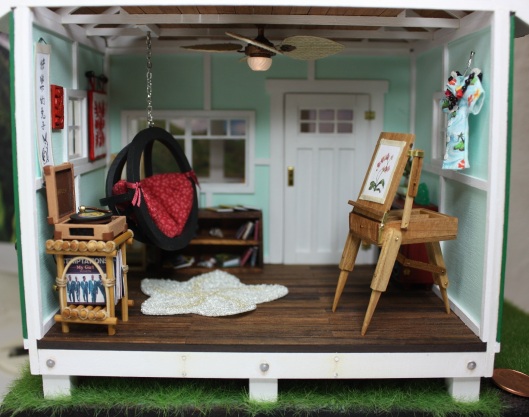 I don’t know why, but putting the ceiling fan together made me very happy, and it was an unexpected cobbling of spare parts. Few homes in Hawaii have air conditioning because they always have the trade winds (a boon of being out in the middle of the ocean) and mild temps. It’s normal there to leave the windows open and maybe have a fan, especially a fun tropical palm fan. The blades are made of woven jute paper.

The shoji lamp hiding in the back left corner took 44 tiny pieces of wood, but I think it puts out a cute glow through the rice paper. As with many other aspects of Japanese culture, these screens were originally a Chinese invention, but they took on a new life, design, and utility in Japan. Each side has eight panes since it is an auspicious number in Japan.

A family beach house just wouldn’t be right without my father’s tunes wafting through the windows, and I secretly learned his favorite albums and artists to make a suitcase-style record player. The records are beads that were actually made from old vinyl records! I had to go to the technical support section of the Crosley website to confirm these do have plugs…all of the pictures of these online would lead you to believe they run on magic. I put my family’s name as the brand.

On the wall next to the Happy Bunny scroll is a carved cinnabar jewelry cabochon from the 1940’s (the painted wood kind of cinnabar, not the crystallized mercury kind…I hope).

The hanging chair was just something cool I saw on Pinterest, but I thought it would be fun for someone to sway in it and dip their toes in a fluffy plumeria rug. 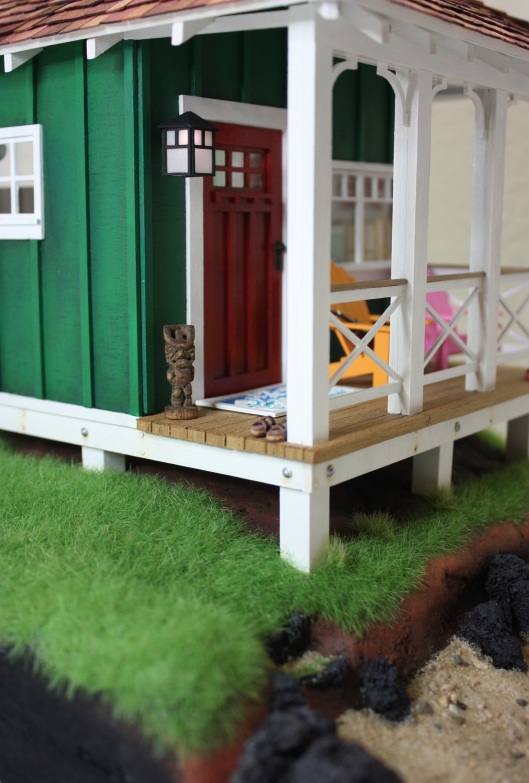 Hawaii is famous for its rusty red dirt and my mom and I spent several minutes in the paints aisle of the craft store going through our memories of Maui’s soil and picking out colors. The lava rock is florist’s foam, and some of some of the sand on the beach (mostly the shells and bigger pieces) came from Maui. The palm tree is made of thick floral wire, wrapped in quilt batting and muslin. Before this morning it had no leaves, and it will one day have a hammock tied to it. 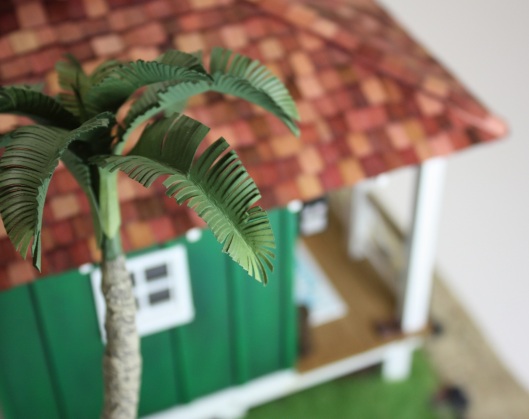 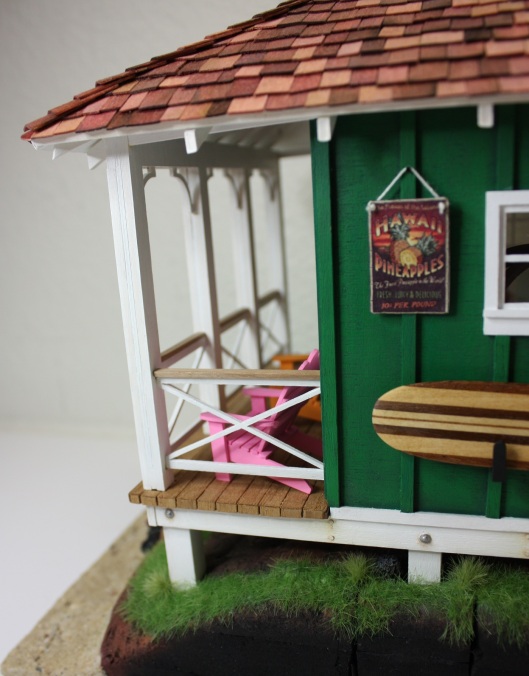 A Hawaiian hale (house) would not be complete without a lanai (porch), which is covered in teak. I still have a habit of stealing wooden coffee stirrers on my travels, and I had a tidy stash of ones from the Bahamas and Portland. Since both places are known for kicking back with a cold, fermented beverage, I fashioned them into Adirondack chairs. I then realized I had a friend who owns a bar with her husband and they particularly like to relax at the beach setting, so these colorful chairs are for them.

Lastly, I present the world’s tiniest pair of Birkenstocks, made of real cork, leather, and human angst.

I also learned along the way that aloha has a much deeper significance than hello and goodbye. According to Queen Lili’uokalani, it is the recognition of life in another being and the happiness that is being part of nature. It is a powerful word that can only be spoken with a pure heart.