I had planned for the round stained glass windows to be a sun and a moon from the start, but months into the project the idea still wasn’t sitting right with me.  So I consulted my best reference.

“What do you think the stained glass windows should be?” I posed to my husband as he was trying to drift off to sleep one night.  Being a good sport, as always, he groggily asked me questions about the tiny inhabitants, and before long there was an epiphany.

In my story of the mill cottage, there is an English mouse, Anna, and a French mouse, Gustave, who fell in love and renovated an old mill that belonged to Anna’s father, turning part of it into a bakery.  (I decided on mice over humans because I enjoy making animal figures more, and because mice are classic inhabitants of mills.)  When my husband suggested the fleur-de-lis to represent Gustave, I immediately realized Anna would be the Tudor rose.  The old heraldic symbols fit together beautifully, and so the name of the bakery became “The Lily and the Rose.”  I am certainly not the first to make this pairing, but the images go with the story and the colors I have in mind for the rooms.

The “stained” glass is a piece of lasercut acrylic, with Gallery Glass leading and paint.  I sketched the lines in Sharpie then dabbled on the leading paint with a fine-tip embossing tool.  After that it was more or less a matter of coloring in the lines.

If you want to have an idea of what comes in the $15 Gallery Glass sampler on Amazon, here you go!  I made the palette after I realized there was a difference in what I saw printed on the back of the box and what I saw in real life.

During our nocturnal discussion, my husband’s primary, very logical question about the windows was how a young married couple living in a rustic windmill would be able to afford a king’s ransom in stained glass. We decided my frivolity in design choice was a little more feasible if a close relative gave the windows as a wedding present. A very nice wedding present, given by Gustave’s father, a glassmaker.

Like real stained glass windows, they don’t come to life until light shines through them.  I got the best photos when I managed to catch the morning sunlight from the back.  When they aren’t illuminated, it is easier to see the textured effect of the paints.

As for the parts that would have been “original” to the mill, no Tudor building would be complete without casement windows. Glass was so expensive in those days that people opted for smaller, more affordable panes held together with leading. I made these made by painting wire craft mesh black and then coating the pieces with a layer of resin. Once cured, I tinted some of the sections with Gallery Glass paint. 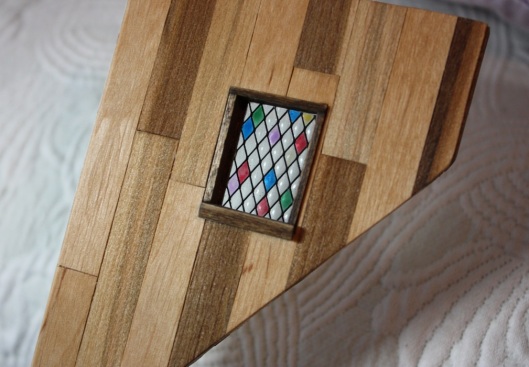 And of course, my husband did not remember any of our conversation come morning :-). 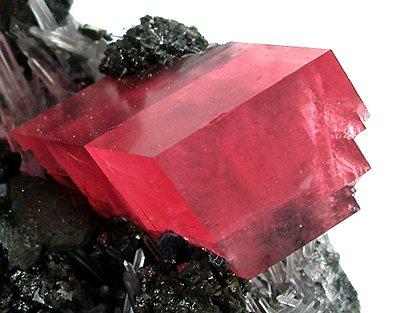 Rhodocrosite in matrix from Sweet Home Mine, Colorado.  Photo by Rob Lavinsky at http://www.irocks.com/

I am trying to get out of the habit of making these weekly gem reports biweekly, and a good friend gave me fun suggestions that I will research for your viewing pleasure.  Today’s is a favorite of carvers and rock hounds since its discovery in the 1950’s and is a relative newcomer in the jewelry market, but gaining popularity.

Named from the Greek rhodon for “rose” and chroma for “color,” rhodocrosite gets its cheerful watermelon and pastel pinks from manganese and has the simple chemical formula of MnCO3.  Rhodocrosite occurs in hydrothermal veins, usually alongside copper, silver, and lead, and was actually discarded as junk ore from metal mining until people began to admire its beauty.  This was the case in Romania, home to some of the finest rhodocrosite deposits, with Colorado and Argentina being other famous bearers.

Rhodocrosite is classically identified by its layered, “bacon strip” pattern of pink and white, but it also occurs in a lovely translucent “gel” form.  Unfortunately, the stone is easily damaged and soft at around 4 Mohs, meaning it has to be treated with care.  Today, most rhodochrosite is used as an industrial mineral in the production of steel and ceramic tile.  The finest specimens reside with collectors, but that doesn’t mean you can’t find a nice cut stone for wearing.

The ancient Incas believed the stone was the solidified blood of their past rulers, lending the mineral its nickname, “Inca Rose.”  Also known as the “Stone of Love and Balance,” rhodocrosite is suggested as an aide for mending a hurting heart, tackling life’s changes with bravado and wisdom, and for bringing calm in troubling times.

According to WordPress, this is my 50th post since starting the Wishcraft Studio blog last July.  I still hope my posts are entertaining, since that is my main goal.  I have some stories and updates waiting in the wings, but for this occasion, I thought it would be fun to traipse through history and give you my five favorite articles, in no particular order.  You can reach each by clicking the link in the title.

This one has to be my overall favorite, because I was pleased with how the costume came out and because I had delicious fun coming up with silly Doctor Who references.  It was also the first time I really got to use my new DSLR camera and the post shows the transition between my old digital (the building process) and the new one (the completed TARDIS). 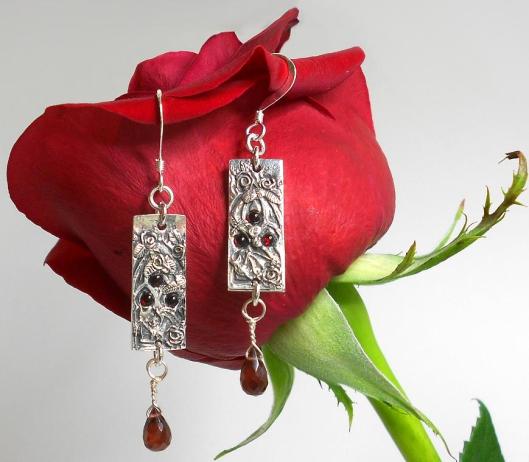 After building a light box and trying to get better photos of my wares, I was feeling like Wishcraft Studio was becoming more and more like a real venture.  I spent a good two hours finding the proper rose, and any day I get to include Pansy in a post is a good day. 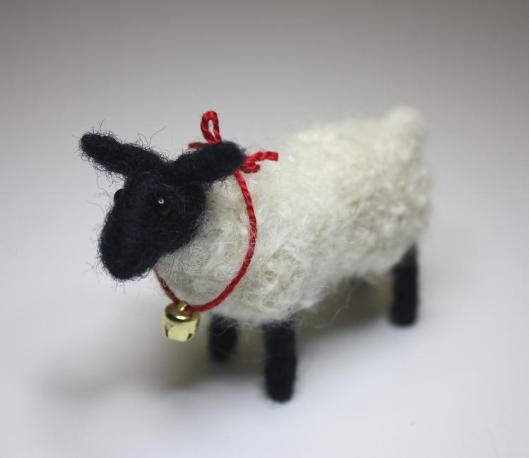 I liked this one because I was able to show the steps that went into making the sheep, and because I thought she turned out so darn cute.

I have fond memories of this ocarina and of my husband helping me find photo locations on a mini date to the park.  He is always such a sweetie and there wouldn’t be a Wishcraft Studio without him.  I was also proud of myself for doing a more challenging silver clay piece.

First foray into needle felting, and introducing Hanna the rabbit! 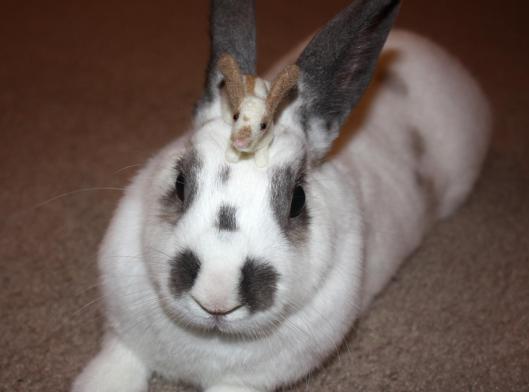 Cute photos of an object on a disapproving rabbit’s head.  What more do I need to say?

I got my homemade light cube working and took some photos of the finished Sangria earrings.  They are now for sale in the etsy shop.   Yay for pieces being done, and in time for Halloween.

Here you can see my untidy setup, along with Pansy the Betta in hospital tank.  A couple of weeks ago he tried to swim though a hole much too tiny for his body and got stuck.  He’s doing great, but I don’t think his scales are ever going to grow back and he looks bald close-up.